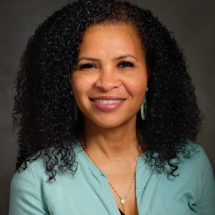 Sherling DiGioia is the program finance manager at the Alliance. In her position she oversees the budget, reporting and contracting functions, as well as state and university funds. She has the integral responsibility of reporting and counseling senior management on financial matters. She is also responsible for mentoring, training and supervising a growing team.

She began her career in the insurance industry as an accountant, which was the foundation of her finance career. She later went to work at Weyerhauser, where she gained a world of experience as a fixed asset accountant, lease accountant and later a financial analyst. Her recent work at the UW Medical Center provided her the skillset needed to excel further as a finance manager.

Sherling enjoys collaborating with others on streamlining projects to effect change. She came to the Alliance because she wants to be part of a meaningful cause and believes in the Alliance’s mission of supporting underserved populations.

Sherling enjoys staying active by running a few days a week. She is also a traveler and has the lofty goal of seeing several countries over the next few years. She most enjoyed zip-lining in the Costa Rican jungle.